Woodridge, IL - August 27, 2018: Orbus Exhibit & Display Group®, one of North America's leading wholesale suppliers and manufacturers of display, exhibit, graphic and event solutions is excited to announce it recently achieved its one millionth order placement. The milestone was reached just one year after the company added state-of-the-art printing equipment to double its graphic print capabilities. 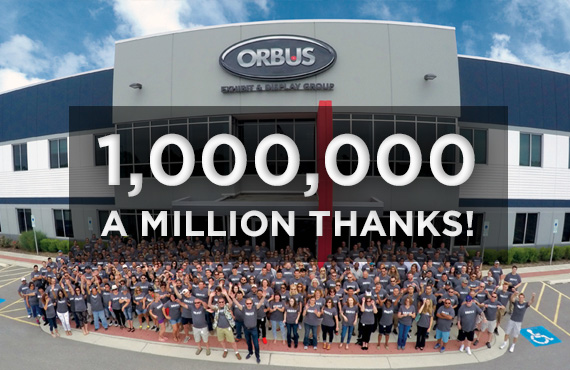 For over 15 years, Orbus has been a pioneer in the exhibit and display industry. During that time, Orbus has grown and expanded with each year in both personnel and capabilities. Orbus employs over 400 full-time staff and in June of 2014, Orbus consolidated its two Illinois facilities to a 350,000-sq. ft. built-to-suit manufacturing and distribution facility in Woodridge, IL. It also has a growing operation outside of Las Vegas, NV, established in 2011.

“It's truly exciting to have reached our one millionth order,” said Giles Douglas, President & CEO or Orbus.“Orbus' talented and dedicated staff plays a pivotal role in company success. This milestone could not have been reached without them.”

Orbus Exhibit & Display Group is a market-leading, privately owned group of companies that specialize in the manufacture and trade only supply of portable modular and custom modular exhibit and display products, graphics and solutions. Companies and brands within the group include The Exhibitors' Handbook®, The Promo Handbook™, Nimlok®, and SignPro Systems®.

Orbus is a proud member of ISA, SGIA, ASI, PPAI, UPIC, and SAGE; the company boasts G7 Master IDEAlliance certification and is registered to ISO 9001:2015 for the highest manufacturing quality standards and ISO 14001:2015 for its environmental management system and “green” efforts.